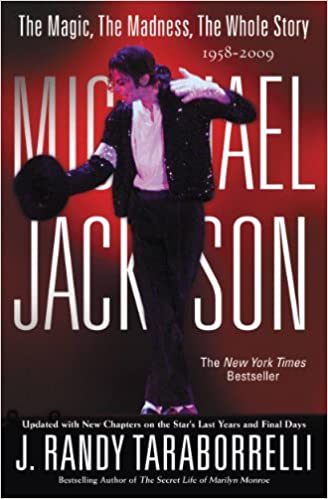 So much has how been said and written about the life and career of Michael Jackson that it has become almost impossible to disentangle the man from the myth. This book is the fruit of over 30 years of research and hundreds of exclusive interviews with a remarkable level of access to the very closest circles of the Jackson family - including Michael himself. Cutting through tabloid rumours, J. Randy Taraborrelli traces the real story behind Michael Jackson, from his drilling as a child star through the blooming of his talent to his ever-changing personal appearance and bizarre publicity stunts.

This major biography includes the behind-the-scenes story to many of the landmarks in Jackson's life: his legal and commercial battles, his marriages to Lisa Marie Presley and Debbie Rowe, his passions and addictions, his children. Objective and revealing, it carries the hallmarks of all of Taraborrelli's best-sellers: impeccable research, brilliant storytelling and definitive documentation.

J. Randy Taraborrelli is a respected journalist, a recognizable entertainment personality, and in-demand guest on many television programs including Today, Good Morning America, The Early Show, Entertainment Tonight, and CNN Headline News. He is the bestselling author of thirteen books.

From The Washington Post's Book World/washingtonpost.com Reviewed by Justin Moyer Did the great flood of words unleashed in the 40 days and 40 nights since the passing of the King of Pop offer new insight into this legend, this plastic surgery disaster, this voice of a generation, this drug-addled man-child? Or was the eulogizing without point or purpose, a rehash of the same stale gossip and well-known stories just to fill airtime and column inches? Michael Jackson, dead at 50, demands a new vocabulary. If Greil Marcus can make Bob Dylan the standard-bearer of American myth in "Invisible Republic" and Nick Tosches can make Jerry Lee Lewis a Gothic antihero in his unforgettable "Hellfire," the rock bio can transcend mere reportage. What writer will now sit down, set aside armchair psychobabble and offer up a real Michael Jackson? Certainly not J. Randy Taraborrelli, who offers this quickly updated version of his 1991 biography as a stand-in for a fresh look at one of the 20th century's greatest entertainers. (The book was updated in 2003 and again in 2004.) A young R&B fanatic who blossomed into a serial celebrity biographer, Taraborrelli met MJ in 1970 when the Jackson 5 was still brushing the dust of Gary, Ind., from the lapels of its matching "lime green vest suits." "The Magic, the Madness, the Whole Story" takes us through the ABCs of Jackson's life that, after last month's orgy of remembrance, are as familiar as "1-2-3": abuse at the hands of a domineering father; fame and fortune at age 10; first rhinoplasty; "Off the Wall"; second rhinoplasty; "Thriller"; Bubbles the chimp; Brooke Shields and Emmanuel Lewis; rumors of homosexuality; "Bad"; Neverland; Lisa Marie; Debbie Rowe; Prince Michael I; rumors of pedophilia; dwindling record sales; arrest for pedophilia; and fatal slide into prescription drug addiction and general quadrillionaire weirdness including, but not limited to, wearing surgical masks in public and consenting to eighth months of interviews with British journalist Martin Bashir. Taraborrelli plays Virgil on the Gloved One's Dantean descent, armed with an enthusiasm for all things Jackson but ill-served by clunky prose. "It is obviously a tragic turn of events if Michael Jackson is being targeted with untrue allegations of child-molestation," he writes in the present tense about the world's most famous dead man. If a publisher slaps 20 pages on to the end of an 18-year-old book and rushes out an "updated edition" less than six weeks after its subject expires, can't a reader expect . . . well . . . the edition to be updated? Still, one can fault Taraborrelli's prose and his publisher's motives, but not his access. As trusted by the mercurial Jackson clan as a reporter can be, the author covered the family from the Nixon to the George W. Bush administrations, documenting every startling triumph and tawdry personal misstep. Taraborrelli relies on lesser, often unnamed players -- music producers, Neverland employees and older brother Jermaine -- to dish dirt, but his own innumerable interviews with Motown's first family lend "Magic" credibility. "I clearly remember the day I wrote 'Michael Jackson Turns 21,' " Taraborrelli boasts. "Then, there was 'Michael Jackson Turns 25' . . . 'Michael Jackson Turns 30.' " If this is hubris, at least it offers relief from watching every reporter who'd ever talked to someone who'd heard of someone who'd interviewed Michael Jackson jockey for five minutes on CNN. But what good is access to an icon if that icon brazenly manipulates the media, and what good are exclusive interviews that provide no real insight? Jackson's otherworldly sexual energy, more than his singing, dancing and songwriting, propelled him to stardom. Fairly or unfairly, what went on under the sheets he shared with pre-adolescent pals overshadows the cultural touchstones of "Motown 25" and "Beat It." If a four-decade media frenzy and a Santa Barbara district attorney can't tell us why Jackson toyed with gender and slept with young boys, can we really know anything about him? Competent reporting at the borders of this mystery isn't enough -- Taraborrelli needs a scoop, a thesis or some hook to hang his narrative on. Anything less is a failure of imagination, and imagination is exactly what this slightly updated biography lacks. Jackson "never seems able to connect the dots of unfolding misery back to his own impulsive actions and questionable judgment," Taraborrelli realizes -- too late to turn it into a theme. By the time the author enters Neverland after Jackson's death to stare into the "Man in the Mirror's" mirror and find only himself -- a mawkish attempt to understand "poor Michael Jackson" -- it's hard to care what lesson he's supposed to be learning. Don DeLillo looked at the Kennedy assassination and gave us "Libra," a nuanced masterpiece that shunned mere protagonists and antagonists to portray conspiracy as incompetence; Curtis Sittenfeld looked at Laura Bush and gave us "American Wife," an unexpectedly gentle depiction of a flawed woman married to a flawed man who had history thrust upon him. These are fictions, but maybe fiction is what the oft-told, unbelievable, unforgettable story of Michael Jackson demands. On his own, he remains shrouded, moonwalking in silhouette.
Copyright 2009, The Washington Post. All Rights Reserved.